This year`s Political State of the Region Report shares the perspectives of six young researchers from different countries in the region. The authors seek to analyse the impact that the Brexit and the new administration in Washington has or will have on cooperation-patterns. A conclusion from the report is that the observations and predictions differ substantially throughout the region. 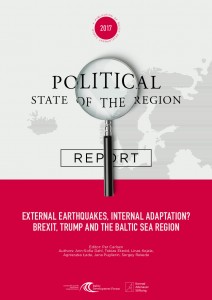 Jana Puglierin describes Brexit and the Trump election as earthquakes for Germany, and tells about the greater demand on German leadership. Berlin is looking for further integration in EU and sees the new American president as a source of global instability. Germany wants to work through international institutions and will work to strengthen cooperation with EU-memberstates of the Baltic Sea Region.
Contrary to Germany, the Polish government advocates a policy of weaker integration, Agnieszka Lada tells. Also contrary to Germany the Polish government supported Donald Trump, but still sees Germany as a main partner.

Sergey Redeka does not see a big deal or restart in Russia-US-relations. The US-policy on post-Soviet space is still unclear, while the Brexit has no crucial significance for Russia.

For the small Baltic states, Brexit and the Trump election were also seen as events of major impact. Linas Kojala tells us how the Baltic states view Britain as an important security partner, and that statements from Donald Trump on NATO and Russia made the Baltic politicians anxious.

Ann-Sofie Dahl describes that it is likely that there will be an effort to strengthen the Common Security and Defence Policy (CSDP) by France, when the UK will no longer be able to block activities. Brexit is also likely to strengthen Nordic cooperation in defence and security in the Nordic Defence Cooperation (NORDEFCO).

Lastly, Tobias Etzold explores the implications on the regional cooperation around Norden and the Baltic Sea. He observes a wish to intensify and deepen cooperation, but also recognizes that cooperation is progressing slowly.

The conclusion is that it is too early to tell how strong the impact of these recent events will be on the Baltic Sea Region. Baltic Sea cooperation remains important, but needs to adapt and adjust constantly to external circumstances.

The 2017 Political State of the Region Report was launched at the 19th BDF Summit in Berlin, 13 June. Read it in full here.