Honorary chairman of Baltic Development Forum, Uffe Ellemann-Jensen at an Intergroup meeting in the European Parliament March 6th called for assistance to give new impulses to the process of making the Baltic region concept survive.

Said Mr. Ellemann-Jensen: “The governments have been reluctant in setting new and clear goals  that would enable benchmarking and evaluation. It is a little sad. If the goals are exactly the same, and if we just copy the EU-level or national levels, then added value of regional co-operation could be very limited. Without clear added value, there is danger that the macro-regional concept will fade away.”

Mr. Ellemann-Jensen – appointed Patron of the EU strategy for the Baltic Sea by the European Parliament´s Baltic-Europe Intergroup  hopes that the Parliament will be able to contribute to the target discussions on the new EU strategi: “Otherwise I am afraid that we will not see a true 2.0 version of the EU strategy during the Danish EU Presidency”. 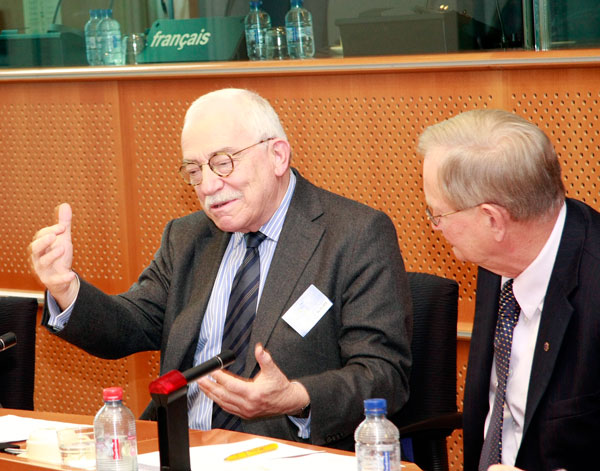 I am very honored to be appointed Patron of the EU strategy for the Baltic Sea Region by the European Parliament’s Baltic-Europe Intergroup. Undoubtedly, the European Parliament and the Baltic-Europe Intergroup have played an important agenda-setting role when pioneering members of this group in 2006 proposed to have an EU strategy for the Baltic Sea Region. After the EU-enlargement in 2004, discussions on the next steps to take in the Baltic Sea region was initiated by the then MEP’s Toomas Henrik Ilves, Alexander Stubb, Henrik Lax, Christopher Beazley and Michael Gahler. As Toomas Ilves – now the President of Estonia – has stated: The Baltic Sea has, for all intents and purposes, turned into a European Union lake, sharing not only a common waterway, once again free for movement of people, goods and services but sharing in large part a common cultural heritage as well as legislation.

This Baltic-Europe Intergroup had the courage to challenge the traditional thinking by proposing a new way of combining European and regional integration ambitions. In my view, the Intergroup in itself represents an innovative way of looking at European integration from a regional dimension.  I welcome your work – and hope that you will continue to challenge existing frameworks and institutions. It has become popular to claim that the enlargement in 2004 went too quickly. And that enlargement is the main reason for the appearance of disintegrating forces in the midst of the euro-crisis and the economic crisis. Recently the former Director-General of the legal service of the Council Jean-Claude Piris, said that “it is time to admit that the enlargement of the EU from 15 to 27 members was too rapid. Europe’s citizens no longer understand the purpose of the EU. They are lost”.  He also said that the EU has become too heterogeneous and fragmented due to social, economic and political differences and the institutional frameworks have not been able to bridge these differences…

I am a little sad that Piris, whom I greatly respect, and others have reached this conclusion – and that the enlargement decision has been put into question. The 2004 enlargement was a historic necessity and we had to take the chance and opportunity we were given at the time. Had we waited until all the details were in place, enlargement would never had happened. We were so to say in a “Catch-22 situation”… And we knew it at the time! It is of course true that Europe has become more complex after enlargement. And it is also true, I regret to say, that “enlargement fatigue” has become a cover for lack of political will and ambition.  I believe that the proposal of macro-regions in Europe is good way of addressing the complexity in Europe. But the macro-regions need to be more ambitious than they are today – and I therefore welcome that the Commission is preparing a new “version 2.0” of the existing strategy for the Baltic Sea Region. We need to take the new concept seriously since it is a cleaver way of addressing the complexity and diversity of Europe.

The Baltic Sea macro-region recognizes that some countries in Europe need to work closer together in order to solve specific problems and enable certain opportunities to be realized. The Baltic Sea Region Strategy reflects that EU-programmes and policies need to be better targeted so that they take into account the specificities of the region and the conditions on the ground. It simply makes good sense. And we need macro-regions in other parts of Europe as well.

Regional co-operation in the Baltic Sea Region will stengthen Europe

After all, we have to admit that innovation policies, research and development programmes have to be applied to different circumstances in Bulgaria/Rumania and in Northern Europe where some of the most innovative countries of the world are placed. Similarly, the Baltic Sea Region is characterized by long distance and small markets that pose specific challenges for logistics, transport and energy networks.  Macro-regions should allow for greater flexibility and regional application of general EU policies. The beauty of the EU strategy for the Baltic Sea Region is that is tries to deepen regional cooperation and integration – while respecting wider European cohesion and key policies such as the internal market. Regional co-operation in the Baltic Sea Region is not meant to split up Europe and add to the disintegrating forces. On the contrary, it is to strengthen Europe. We should never allow for regional cooperation to add to disintegration. It is however a useful contribution to addressing the fact that the EU has become too heterogeneous in many respects.

I believe that the many people who are engaged in cross-border projects in the Baltic Sea Region find it very useful to work closer to their immediate neighbours and that it helps bring the EU closer to the citizens. The macro-regions have a potential of becoming a meaningful intermediate level between the 27-level and the EU citizen by shortening the distance. This being said, it is also my hope that more countries of the Baltic Sea Region will join the Euro-zone as quickly as possible – my own country included. In the Baltic Sea Region we need to have high integration ambitions on both a regional and European level.

At the last BDF Summit in October in Gdansk, we discussed with the European Commission new ambitions for the regional cooperation. The question was how to introduce specific targets and goals: What do we want to achieve and when? Without such clear targets it will be difficult to measure progress.

I am afraid that this discussion after Gdansk has not been characterized by high ambitions, courage and imaginativeness thinking that Ilves, Stubb, Beazley, Lax and others demonstrated in 2006. The Governments have been reluctant in setting new and clear goals which would enable benchmarking and evaluation. It is a little sad. If the goals are exactly the same, and if we just copy the EU-level or national levels, then the added value of regional cooperation could be very limited. Without clear added value, there is danger that the macro-regional concept will fade away.

This is where you come in: I hope that the European Parliament will be able to contribute to the target discussion and to give the process new impulses. Otherwise I am afraid that we will not see a true 2.0 version of the EU strategy during the Danish EU Presidency.

Finally, I would like to draw attention to the need to improve information and communication which has been identified as aproblem area. Baltic Development Forum has presented an innovative proposal which has been forwarded to some of the members of the Intergroup. It is called “NewsWave”. I hope that the European Parliament would set aside funds for such purposes. We need to communicate better to the citizens in the Baltic Sea macro-region. As I mentioned earlier, we have the chance of shortening the distance between the EU 27 level and the EU-citizens. Innovative thinking and independent regional news exchange is needed.  Members of the European Parliament understand better than any the importance and difficulties in communicating about European and regional affairs in national media. BDF hope to have the European Parliament as a close ally in this area.

As Patron of the EU strategy and honorary chairman of Baltic Development Forum, I will do my best to promote the strategy and to facilitate the important role of the European Parliament and the intergroup. In fact, the BDF Summits have had the EU strategy as part of its agenda ever since the 2006 Summit in Helsinki when Christopher Beazley was a speaker at the Summit for the first time together with other colleagues of the group. The next Baltic Summit arranged by Baltic Development Forum will take place in Copenhagen 18-19 June – when the 3rd Annual Forum of the EU strategy also takes place. I hope to meet many of you there.

The work of BDF and the Intergroup is important in building bridges and removing barriers in the Baltic Sea Region – and this holds an important message to the rest of  Europe: We must demonstrate all the advantages of enlargement in 2004 – and prove that we are able to elaborate flexibility and cohesion at the same time. It will be the best way of showing that enlargement of the EU did not go too quickly.