Baltic Development Forum was invited to introduce an upcoming discussion paper on e-skills at the high-level conference “e-skills for jobs 2015”, organized in Riga on 13 March by the Latvian EU Presidency, the European Commission, the Latvian ICT Association LIKTA, DIGITALEUROPE and others. The paper is being elaborated by the ICT Think Tank “Top of Digital Europe” as a joint initiative of BDF and Microsoft.

Torben Aaberg, Head of Public Affairs, BDF, was a panel speaker in the conference session “Education and training solutions to acquire e-skills”. In addition he participated in a round table organized by European Schoolnet the day before the conference.  Torben Aaberg presented the main features of the upcoming discussion paper, including the results of a short survey made among ICT companies, start-ups, universities and venture capitalists in Denmark, Sweden, Norway, Finland and Estonia. The survey indicates that there may be gaps between educational institutions and the industry regarding what kind of e-skills are needed and how to provide them.

•    Leveraging of programming and e-skills in education and the empowerment of teachers and school leaders to make use of new technology and approaches.
•    The mapping of and interaction with the entire knowledge value chains of e-skills.
•    The benchmarking of successful models for direct e-skill collaborations between educators and employers.

The discussion paper “Coding the Future – the challenge of meeting future e-skills demands in the Nordic-Baltic ICT hub” will be launched by “Top of Digital Europe” in the beginning of April. It will be followed by discussions aiming at:

•    Displaying the diversity and different approaches to e-skills in the Baltic Sea Region.
•    Putting forward industry-education collaboration cases that successfully combine this diversity with the digital strongholds of the region, to inspire the European process.

The conference “e-skills for jobs 2015” was the official launch of the e-Skills for Jobs 2015 campaign – an initiative of the European Commission implemented in synergy with the Grand Coalition for Digital Jobs.

The conference took stock of existing and new digital jobs in Europe today and the corresponding skills needs. The debate highlighted the contribution of ICT to the digital transformation of the European economy and its potential to foster innovation, competitiveness, jobs and growth in all business sectors. To showcase innovative ICT education and training policies and solutions, the event discussed the future actions of the Grand Coalition for Digital Jobs, including reflections on the role of national coalitions. BDF was kindly invited by Mara Jakobsone, Vice President of LIKTA. LIKTA is represented in the Advisory Group of Top of Digital Europe by Chairman of the Board, Signe Balina.

A Riga Declaration urging for joint actions to unlock the potential of e-skills to fuel growth and job creation was adopted shortly after the conference. 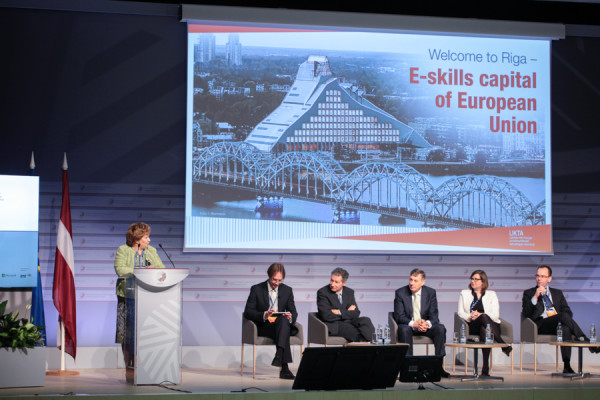