An international energy project, called RENSOL, will be soon implemented in Kaliningrad oblast and it will bring improvements of what has been already initiated on the environmental front. The project’s focus is primarily on energy efficient lightning and housing.

The overall project objective is to enable partners in Kaliningrad – in collaboration with Nordic partners – to tackle climate change challenges more effectively through EE and RES solutions, and thereby supporting the cross-border and cross-level cooperation. The energy project will bring strong international team from Finland, Sweden, Denmark and Russia that in collaboration with local partners will endeavour to introduce international energy standards and energy management and, as overall target, to upgrade ecologically sustainable energy production and consumption in building and lightning. 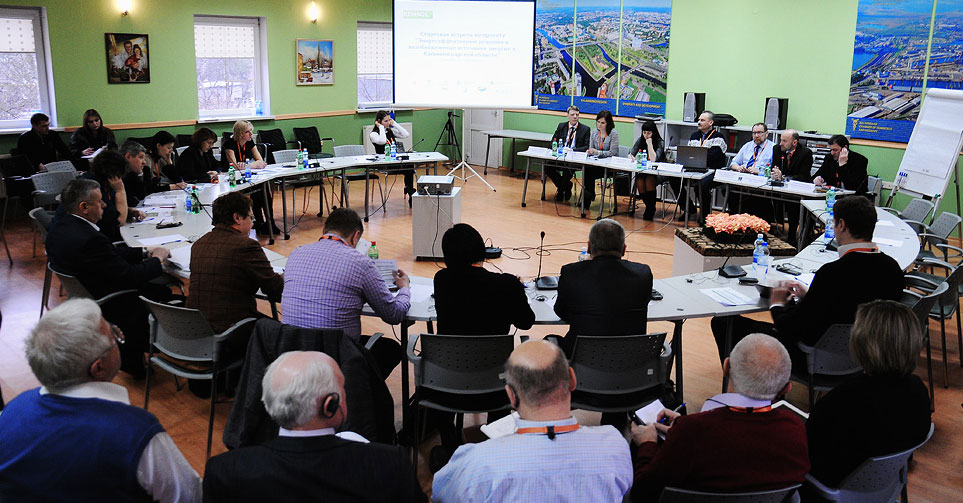 The project had its kick-off meeting in Kaliningrad 21-22 February at the Kaliningrad Chamber of Commerce and Industry. The kick-off meeting consisted of an internal working partners’ meeting on 21 February and an open seminar for broader audience on 22 February.The aim of the seminar was to present the project, introduce a strong international team and establish an open dialogue with external stakeholders. The seminar gathered 45 stakeholders from municipalities, local government, business and academia. The participants welcomed the project by expressing their support and interest in the upcoming activities. The audience voiced their concrete needs, own possibilities in solving the problems and expectations from the project. Representatives from municipal and regional levels mentioned local target programmes, in particular the Federal Law No. 261-FZ “On Saving Energy and Increasing Energy Efficiency”, municipal target programmes on energy-saving, the Federal Law № 185-FZ “About Fund of assistance to reforming housing and communal services” and underlined that the targets of these legislative initiatives are aligned with the project’s objectives.

It was highlighted that application of energy effective solutions as well as development of financing models are in extremely high demand in the Kaliningrad region. Housing sector including residential areas, industrial and social objects, is an area that needs new modern solutions and investments. The local government, represented by Ministry of Infrastructure Development and Ministry of Construction and Housing of the Kaliningrad Oblast, made a remark that not only new technologies but also logistical solutions (purchase of new technologies, their delivery and transfer, usage, training etc) should be introduced. There is a strong need of developing new mechanisms and models of financing EE and RES solutions in the Kaliningrad Oblast and other regions in the Russian Federation. To a list of challenges could be added a poor awareness of the population as regards EE and RES solutions and their benefits in upgrading the standard of living, scarce financing sources and insufficient practice of ESCO solutions. A concrete proposal from the audience came: focus on solving the problem why these modern advanced technologies are not applicable in the Russian Federation and what are the reasons behind? How to improve incentives for business to invest in innovative solutions?

The participation of local stakeholders provided us with valuable information as regards local needs and priorities and will be considered during the implementation of the energy project.

Building Knowledge through identification of the latest energy efficient and renewable energy solutions in Finland, Sweden and Denmark, and adapting them to the Kaliningrad context. Production of a feasibility study publication and arrangements of study trips to Nordic countries.

Introducing Energy Management Standards via on-site training of Russian representatives by European energy experts and organising a seminar focusing on theories and standards for energy management according to the international energy management standard, ISO 50001.

Elaborating Financing Modalities for widespread deployment of solutions identified by the action and development of plan proposals for action – informing about available funds and financial mechanisms to deploy solutions at speed and scale.

Ensuring Result Multiplication in other regions of Northwest Russia and enhancing outreach and results beyond the project period by developing clear feasible plans for project results multiplication with a particular geographical target on Kaliningrad Oblast and northwest Russia.