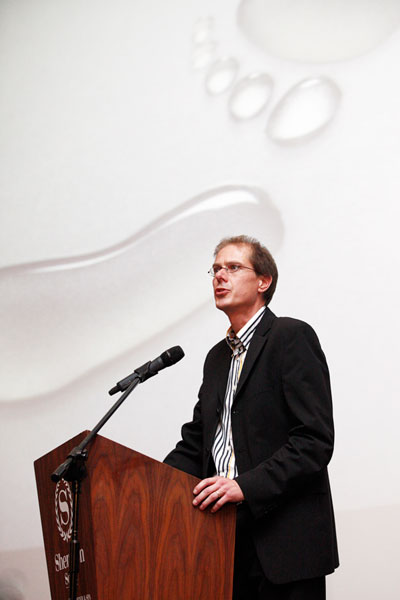 The 2011 Baltic Sea Award goes to Professor Arjen Hoekstra for his pioneering work on the water footprint concept. Mr. Hoekstra is both a university academic at the University of Twente and scientific director of the international NGO The Water Footprint Network, www.waterfootprint.org.

In many respect the Baltic Sea is one of the most polluted waters in the world. This situation is of course both unacceptable and untenable. Luckily the political will to address this situation has increased over the last years, but concrete action is still called for.

The water footprint can help us to evaluate our own use of water, to raise awareness and to sharpen our competences. Better knowledge of the water consumption and the impact of waste water on the environment should become good business not least since the price of water is expected to increase dramatically in the future. We hope the water footprint concept will be welcomed by business as a new aspect of companies’ corporate social responsibility in the Baltic Sea Region.

Next year the work of Mr. Hoekstra is expected to be turned into an international ISO standard. This will hopefully be welcomed by business, by national and local government, and by the general public as an objective way of measuring our use of water resources.

The winner was announced yesterday by Lars Andersen, Vice President SAS, on behalf of the SAS and Coca-Cola Environmental Foundation at the ongoing Baltic Development Forum Summit in Gdansk, Poland.

“Water is a scarce resource, which we also have to regard as fragile. The global heating and climate change will change the global water situation dramatically. It is our hope that the Baltic Sea Award can help to introduce the water footprint in our part of Europe“ Lars Andersen said during the award ceremony.

The Award winner was given 5000 euro and a Diploma signed by Lars Andersen, Vice President SAS, Donald Tusk, Prime Minister of Poland, and Uffe Ellemann-Jensen, Chairman of Baltic Development Forum.

About the Baltic Sea Award

The Baltic Sea Award is assigned to an individual or organisation that have fulfilled one or several of these criteria:

The Baltic Sea Award has previously been given to Mr. Björn Carlsson founder of the project Baltic Sea 2020 (2007), Ms. Tarja Halonen, president of Finland (2008), Ms. Arminta Saladziene, Chairman of the Management Board of NASDAQ OMX Vilnius and of the Executive Committee of the Baltic Institute of Corporate Governance (2009), and Cruise Baltic is a network of 27 destinations in the Baltic Sea (2010).

The Scandinavian Airlines System and Coca-Cola Environmental Foundation is a foundation that supports environmental projects in schools and public organisations in the Nordic and Baltic countries.