16-17 June, Baltic Development Forum participated in the first Baltic Business Arena, that was held in Stockholm.

The event took place in connection with the 56th International Council for Small Business (ICSB) at the recently inagurated Stockholm Waterfront Congress Center.

Baltic Business Arena was a matchmaking event for small and medium sized enterprises (SME) from the Baltic Sea Region and beyond. Approximately 80 entrepreneurs and SMEs took active part in matchmaking, and intensive talks took place at the more than 20 working tables which left the impression that lasting business relations were being made.

The event was seen as part of bringing into practice the EU strategy for the Baltic Sea Region and the large macro-economic initiative. It was organised by SIDA Baltic Sea Unit, Enterprise Europe Network, and the Swedish Agency for Economic and Regional Growth among others. Baltic Development Forum’s director participated in some of the small workshops that were also held on topics such as trade barriers in the region and networking as part of business development.

The Director General of the European Commission’s Directorate General for Regional Policy, Mr. Dirk Ahner visited the Baltic Business Arena after delivering the opening speech during the ICSB.

Baltic Development Forum met with the organizers in order to discuss the possibilities of a repetition of the event somewhere else in the Baltic Sea Region next year. 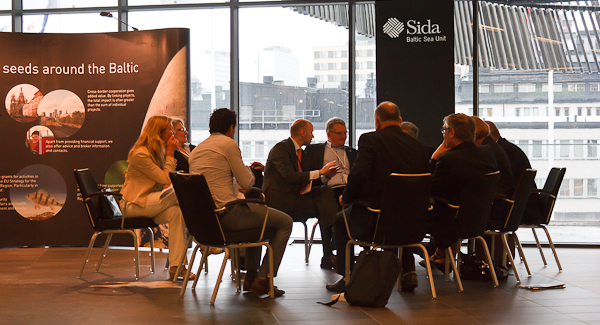