During the 18th Baltic Development Forum Summit and the 7th Strategy Forum for the EUSBSR, BDF launched three new “State of the Region Reports” providing an economic and political outlook for the region and analyzing the perspectives for regional cooperation.

The 18th BDF Summit explored the potential for growth, innovation and competitiveness in the current changing political and economic environment, and the potential for business opportunities in emerging industries and sectors. The conference was held in Stockholm on 8th November in conjunction with the 7th Strategy Forum for the EU Strategy for the Baltic Sea Region.

In her welcoming speech Lene Espersen, chairman of Baltic Development Forum, stressed the need to continue to develop cooperation among the countries in the Baltic Sea Region and look for “islands of cooperation” with partners in Northwest Russia despite the current difficult political reality facing the region.

2016 State of the Region Report 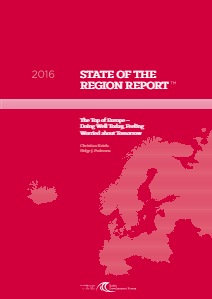 This year, the State of the Region Report confirms that the region is doing well in many regards with positive growth and strong levels of consumption as indicators of a high level of prosperity and good quality of life. Generally, the Baltic Sea Region has overcome the crises of recent years well, with unemployment receding and public finances in broadly good shape. The region also continues to rank high in international assessments of competitiveness and innovative capacity.

However, this year’s report also shows a more negative side to the reality across the Baltic Sea Region. The exceptional nature of monetary policy with interest rates close to zero is a key factor explaining high levels of consumption. It raises questions about the sustainability of current levels of prosperity and concerns about asset bubbles that might emerge. The monetary policy leaves little ammunition should a new shock or cyclical downturn hit the economy, and the low interest rates have not been able to spark investment in the business sector. A specific concern is the continued erosion of the region´s position in global markets, both for exports and for foreign direct investment.

Unfortunately, this is something that has received less attention in recent years, where the report sees little evidence of coherent political action for higher competitiveness. Stronger regional collaboration is no panacea in this regard, but can play a supporting role in efforts to strengthen the region’s hands independently of how the external global environment develops.

2016 Political State of the Region Report 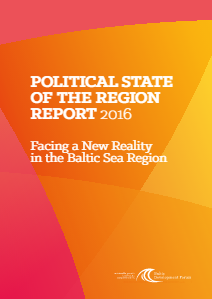 The report is describing the critical development in the general political climate and the possibilities of keeping channels open and soft cooperation going on. As an example they are looking into energy-security and comparing cooperation in the Arctic and Baltic Regions.

2016 State of the Digital Region Report

“State of the Digital Region 2016” report, published by Top of Digital Europe, a joint initiative of BDF and Microsoft, presents an overview of how Baltic and Nordic countries have been performing within the digital economy. This second annual edition of the report re-affirms that the countries in the region are frontrunners in many aspects of the digital economy. But it also confirms that the countries need to step up if the region is to stay in the lead as a global ICT hub. 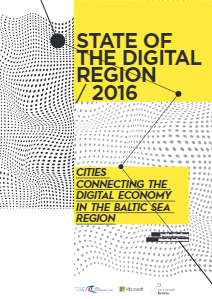 The paper also looks closely at the role of cities and city networks fostering digital growth, since increased urbanization and digitization are increasingly intertwined. Cities are the connecting dots of the digital market, with the startups they tend to foster lighting the fire of digital growth across many sectors. However, these urban hubs often lie far apart, separated by national borders and the Baltic Sea itself. To boost cross-border digital collaboration and create an integrated digital market in the region, we need to encourage tech-savvy cities to partner within each more closely. Creating a formidable tech network “cluster” of cities would promote innovation, entrepreneurship and growth through the flow of information, ideas and human capital between urban economies.

The report was presented by the authors, Joakim Wernberg, PhD student at Lund University and Senior Policy Analyst at the Chamber of Industry & Commerce in Southern Sweden, and Martin  Andersson, Professor at Blekinge Institute of Technology and Lund University. The launch was followed by a panel discussing the report’s key observations on the region’s digital performance and the potential for transnational digital collaboration. The panel also discussed how cities can be drivers for a digital single market in the Baltic Sea Region by offering attractive environments for digital startups and by supporting and connecting digital ecosystems.

Watch the video from the launch.