Top of Digital Europe has launched a Discussion Paper “Towards a Cross-border Open Data Agenda – A Case for a macro-regional agenda on open government data in the Baltic Sea Region”. The aim is to initiate a debate on the vast potential for open government data across borders in the Baltic Sea Region (BSR). It is a call to governments to work jointly on an ambitious transnational open data agenda to fully grasp the potential from open data, and cross-border open data in particular. 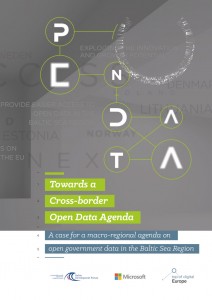 As leaders in ICT and the digital economy, the BSR countries are well placed to set new standards for open data-driven innovation. This is why Top of Digital Europe suggests governments in the BSR to commit themselves to a macro-regional approach to open government data to enable the region to fully exploit the economic potential in terms of job creation, cost savings and new market opportunities.

The paper puts forward a number of proposals for transnational pilots and initiatives to build awareness, enhance coordination and collaboration, exchange best practices, and take pilot steps towards harmonisation of data and cross-border data flows. The aim is not to duplicate what is already going on at the EU level, but rather inspire and support the EU process on Open Data.

In Top of Digital Europe, we are ready to engage with partners who are interested in moving this agenda forward together with us. We hope the paper can inspire discussions on these topics and we welcome comments and ideas on how to take the topics further.