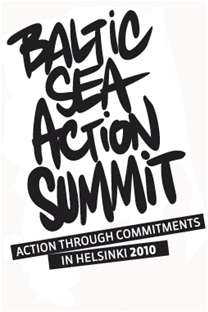 Governments, private companies, business leaders and NGOs to contribute to the carrying out the actions needed to restore the status of the Baltic Sea.

As part of the preparations the Summit, Finnish Embassies of the region are inviting local business representatives to an information meeting on  the Summit and on the alarming environmental state of the Baltic Sea.

Representatives of the private sector are invited to make a specific commitment to restoring the Baltic Sea. On 23 November a meeting took place in Copenhagen at the residence of the Finnish ambassador.

BDF Chairman Uffe Ellemann-Jensen and Director Hans Brask participated as speakers in the meeting giving full support to the initiatives. BDF informed about on the process of the EU strategy for the Baltic Sea Region and the plans to create Water Platform for the private sector, drawing attention to the need to involve the private sector in both addressing the situation and in displaying the many water related competences and technologies that exist in the region. BDF shares the view of the Baltic Sea Action Summit that the time has come to underline the opportunities of the private sector of finding solutions and making commitments since the world will increasingly demand water management competences and technologies.

BDF is not least satisfied to contribute to the Finnish initiatives given the fact that Tarja Halonen, President of Finland, received the Swedbank Baltic Sea Award at the BDF Summit in Copenhagen-Malmö in 2008  for her fiery spirit and personal and lifelong commitment into making the region stronger, better and sustainable. The award has been established by the initiatives of BDF.

BDF has during 2009 organized a meeting with the Swedish Minister for Environment, Andreas Carlgren, devoted two sessions during the BDF Summit in Stockholm to the subject of Baltic Sea water and is the process of creating a Water Platform in cooperation with Grontmij/Carl Bro.

In cooperation with the Finish Government that is a strategic partner of BDF and the Baltic Sea Action
Group, BDF wants to contribute in ensuring a coherent regional process of meetings and ideas in order
to coordinate the work. This is not least necessary since the Heads of Government will meet twice in 2010: 1-2 June 2010 the Heads of Government will meet in Vilnius and BDF will in have its yearly Summit in Vilnius as an integrated part of this event. This meeting should also be used to promote the common cause.