More companies want to understand their consumption of natural resources and their environmental and climate footprint: not just to display responsibility, but also to assure their survival. BDF is partner in a project which develops tools for companies’ natural capital accounting to meet the growing demand.

It takes a huge amount of water to produce clothes. For example, the production of just one T-shirt takes around 1,400 litres of water, equivalent to more than 10 full bath tubs. Not only does this place an enormous burden on the environment; it also means that the textile industry will struggle to survive if water shortages spread or the water comes at the wrong times and is of poor quality – a scenario that has moved closer in some parts of the world as a result of climate change.

“Companies’ insight into their impact on the environment is not just about being able to prepare nice CSR (Corporate Social Sustainability) accounts. Natural capital accounting has moved into the engine room in many companies, as a basis for strategic and economic decisions. Reducing the environmental footprint of manufacturing has quite simply become a business-critical parameter for many companies and their handling of risks and opportunities,” says senior project manager Jesper Karup Pedersen.

COWI is heading the development project that aims to develop a number of tools that companies can use for natural capital accounting (NCA) – in other words putting an exact price on the resource consumption associated with the production of selected goods.

The project is being run in close collaboration with BDF as well as universities and businesses in Scandinavia.

“We are excited to be part of a project that supports companies in their efforts to streamline sustainability into their business strategies”, says Lovisa Selander, Head of Sustinability and Communications at BDF. “Many companies in the Baltic Sea Region have already come very far in their sustainability efforts, and our previous projects has shown us that there is a demand for guidance on navigating existing concepts and standards.”

The companies involved include Egetæpper, Maersk Drilling and Arla Foods, and many of them are already well advanced in collecting and using NCA data in their business planning. For example, Arla Foods managed to reduce its climate footprint in 2014 by 16 % from 2005 levels despite increasing production. This was partly down to efficiency improvements in the production supply chain, which were made on the basis of the NCA data collected.

Better business – better for the environment

But companies, investors and authorities see many shortcomings in the existing methods.

“In the vast majority of cases, investors, authorities and others are unclear about the data that has been used. And on top of that, the methods vary. There is no common standard to facilitate the analysis work and allow us to compare different companies’ NCA,” Karup Pedersen says. “Another drawback of the existing methods is that many of them are time-consuming and expensive.”

The fact remains that NCA has proved its worth, and many businesses have already benefited from it.

Nike is one of the companies that have already addressed the consumption of natural resources in their production. For example, they have developed a new way of dyeing T-shirts without using water. It is not just a matter of making the business less dependent on water resources – it also looks after the environment. 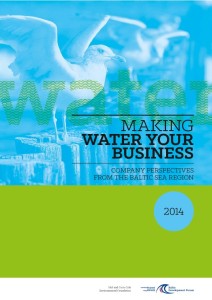 Making Water Your Business
This report introduces some of the tools and platforms available for corporate water sustainability. Seven big companies in the Baltic Sea Region share their experiences in implementing water management strategies and concepts.