On 3 November the Baltic Development Forum participated at the final conference of the BSR TransGovernance project in Brussels, where the final report and it’s highlights were presented and actively discussed by the attending stakeholders from the whole Baltic Sea Region. See full conference programme.

The project started in September 2012 and has lasted for two years. It was operated by a consortium of 24 partners sharing joint interest in transport issues. The overall objective was to ensure greener and more efficient transport in the Baltic Sea Region, which is in line with Priority Area 11 of the EU Strategy for the Baltic Sea Region. As an output, the project BSR TransGovernance managed to show how multi-level governance can contribute to a better alignment of transport policies in the BSR, by studying and developing the concept of multi-level governance as a tool to use in order to enhance more efficient decision-making process through good networking, dialogue and interaction among regional stakeholders.

Being an honest broker in the Baltic Sea Region, Baltic Development Forum strongly supports the overall approach which was applied by the project in addressing transport cooperation. More active involvement of the business sector, involvement of end-users from the outset of the planning process, and stronger political commitment and ownership are the pillars on which to build any successful cooperation. For Baltic Development Forum it was a learning experience to be a part of such a large-scale project, to get access to international networks and experts in the transport field, and to be a part of interesting discussions and views sharing.

Besides providing a communication and networking platform, Baltic Development Forum has participated in communication meetings, moderated two seminars and taken the initiative to commission an article on the Fehmarnbelt fixed link as a living example of multilevel governance.

As a partner, Baltic Development Forum strongly believes that new Interreg BSR Programme 2014-2020 with its strong focus on transport could be a new financial framework and provide the possibility for further development of the project initiatives. 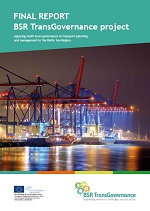