Baltic Development Forum together with the Swedish Agency for Economic and Regional Growth (Tillväxtverket) have launched a discussion paper titled “The Future of Europe and Globalization: Where is the Voice of the Baltic Sea Region?”. The paper has been developed by Dr. Christian Ketels, Harvard Business School, and Dr. David Skilling, Director of Landfall Strategy Group. 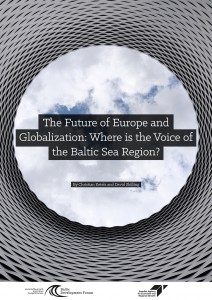 The paper aims to spur discussions on how the Baltic Sea Region should respond to an ever-changing world and prepare for the future. What does this mean for a region dominated by small open economies, and how does it impact the potential of regional integration to serve as a mean to tackling challenges and influence the future development of Europe? How does macro-regional integration further the ability of small open economies heavily reliant on international trade to engage and wield influence in a post-globalised world, specifically in the context of the Brexit, Trump and slowing economic growth? The paper recommends a more proactive approach and a stronger common voice to influence the region´s position globally.

The main findings of this analytical paper were presented at the session “Looking towards to 2030: next steps for preparing the Baltic sea region for the future” organized during the 8th Annual Forum of the EU Strategy of the Baltic Sea Region” in Berlin on 14 June. Read it here.

Report Launch at the Annual Forum of the EUSBSR

The panelists provided their comments to the findings by referring to what has been achieved on national, regional and local levels. The Estonian ambassador Mart Laanemäe stated that the Baltic Sea Region represents one economy, even if the region is primarily characterized by small open economies. It was highlighted that the Baltic Sea Region has a solid foundation to stand as one region, being equipped with sound policies, like the cohesion policy. It is true that the region is comparably small, but it has strong partnerships to stay resilient in the future. 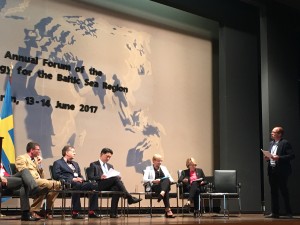 Swedish State Secretary Mattias Landgren quoted the words of the Swedish Prime Minister from the Strategy Forum in Stockholm 2016, saying that the Baltic Sea Region should be in the driving seat. The State Secretary stressed that cooperation is crucial for building trust and developing joint ideas, and it should be further developed across all levels of the Baltic Sea Region country governments. He agreed with one of the conclusions of the presented report that “the region should act rather than adapt”.

The Deputy Prime Minister of Land Schleswig-Holstein Anke Spoorendonk flagged for more commitment and political leadership from the countries in the region. As she pinpointed, there is ongoing dialogue and significant achievements in some areas, but more can be developed based on shared values and through the existing platforms. Funding should not be underestimated; it is crucial for backing up good initiatives.

Vice-President of CPMR (Region Skåne) Annika Annerby Jansson, proudly reflected on how much the Baltic Sea Region has already achieved through various collaboration formats. All ongoing initiatives, cross-border partnerships, political frameworks should not be underestimated and taken for granted. It is important to learn from each other and share best practices. Another good advice is to focus on e-government policies, social cohesion as preconditions for continuing as one region.